In the permanent exhibition of the Museum of Vojvodina, archaeology is presented in three halls, on a space of about 700 m2. The exhibition presents the most valuable finds arranged according to modern museum principles (reconstruction of habitations and individual structures, photographs, maps, legends) and covers the period from the Paleolith to the late Middle Ages. The auxiliary devices are used to give a better insight into the life of the population, their economic development, burial customs, arts and religious worship, from the beginning of man`s inhabitation of this region. 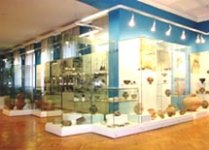 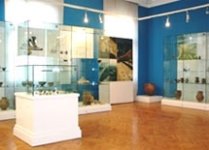 Single finds of the most ancient habitations in the Vojvodina region, dating from the paleolith (the oldest Stone Age) are depicted on wall illustrations and by artefacts from the period from the localities of Zemun, Irig, Vršac.

The period of the first agricultural settled cultures in this region, the Neolith (6000-3200. B.C.) which have been analysed systematically are depicted as habitations, necropolas, and exhibits from various branches of the economy, art and religion. The peoples of this period were inhabitants of several cultures and cultural groups (the Starčevo, Vinča, Potisje, Lenđel groups), excavated on the territory of Vojvodina (Donja Branjevina near Odžaci, Starčevo, Golokut near Vizić, Gomolava near Hrtkovci etc.).

In the period of the Eneolith, Copper Age, new ethnic elements appear on the territory of Vojvodina coming from northern Pannonia and Transylvania with a characteristic burial in burial mounds (Batka, Vojlovica near Pančevo). These steppe elements from southern Russia and the Ukraine are considered to be the first traces of Indo-Europeans, inhabiting the region in the third millennium B.C. (3200-2000. B.C.).

The cultures of the Bronze Age (early, middle and late) are depicted through a mixture of the remains of the material culture of the native inhabitants and the newcomers, which is characteristic of all the cultural periods in this region (2000-950. B.C.). The beginnings of the production of metal, originated in the previous period, are perfected with finds in fortified habitations (Gomolava, Feudvar near Mošorin, Gradina on the Bosut) and the burial customs of cremating the dead. 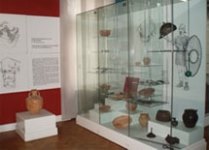 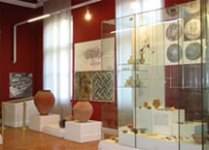 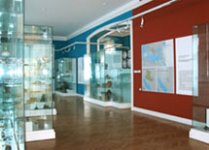 The early Iron Age (950-300 B.C.) is characterized by the development of the use of iron and numerous fortified habitations as well as the influx of new cultures in this region (Basarabi-Bosut). The largest number of researched fortified habitations from this period (Kalakača near Beška, Gradina near Bosut, Feudvar near Mošorin) a reconstructed by an abundance of finds of material culture. In the southern Banat region, the Skits appear from the distant steppes, but without larger traces of material culture uncovered to date.

The beginning of the early Iron Age, the Laten, is connected with the arrival of Celtic tribes in the middle of the Danube basin region. In addition to fortified habitations (Vrbas, Plavna), this period also brought new production methods with the appearance of the pottery wheel and the beginning of the minting and use of coins in trade. There have been important hoard findings in Krčedin, such as weapons, tools, jewellery and ceramics on the locality of Gomolava near Hrtkovci, Obrež, Vrbas and others.

At the end of the 1st century B.C. and the beginning of the 1st century A.D. Roman conquests began in this region of the Pannonia Province, whose eastern border was the Danube. Part of the Limes in Vojvodina included the following fortifications and settlementsČ near Zemun (Taurunum), Novi Banovci (Burgenae), Slankamen (Acumincum), Surduk, Čortanovci, Petrovaradin (Cusum), Banoštor (Bononia), and the fortification near Begeč (Onagrinum). In the Srem region, besides the mentioned fortifications on the Danube, there were two city settlements Bassiana near Donji Petrovci and Sirmium (Sremska Mitrovica), which during the 4th century, was the political, cultural and economic centre of the Pannonia Secunda Province. Abundant finds from excavations so far (Gomolava, Hrtkovci, Sirmium, Čortanovci, Beška, Sviloš) provide an insight into the way of life of the local and newly arrived population.

Exceptionally significant finds from this period (the 4th century) are two ceremonial, gilded helmets from Berkasovo near Šid and frescoes from a tomb Beška. In the Bačka and Banat regions a material culture developed in parallel with characteristic finds which were created by a symbiosis of the Roman influence, the native and eastern Pontic ones (Zrenjanin, Vršac, Bečej, Vrbas, Ada, Krstur). 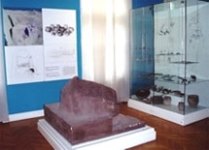 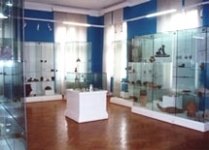 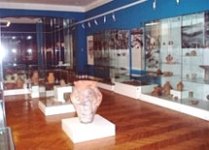 The period of late antiquity and early Middle Ages is important by the increased incursions and joining together of various barbaric peoples and tribes from the East, in the region of the middle Danube basin regions (Huns, Gepids, Eastern Goths, Slavs, Avars and Bulgarians), which also contributed to the fall of the Roman Empire. In this region some of the tribes settled permanently creating their own settlements. At the present the most research has been conducted on settlements dating this period in Horgoš, Padej and Bečej, and the grave sites in Bočar, Mokrin, Vrbas, Slankamen, Čelarevo and Vojka.

With the coming of the Magyars in the late 9th century, the Bjelobrdo culture took shape over the whole of the Pannonian region, as a result of the mutual infuences between the Slavs and the Magyars. With the Magyar conversion to Christianity around 1000 A.D. a new state was established in this region. During this period several nomadic peoples arrived from Asia, the Pečenjezi, Uzi, Kumani and Mongols. Their invasion of 1241/2 drastically changed the demographic picture of this region. Characteristic finds from this period are a hoard of Byzantine icons and exceptionally rich, ornamental stone decorations from Rakovac.

These changes facilitated the settlement of middle European peoples (Germans, Poles, Czechs) during the 13th and 14th centuries, and later the Turkish conquests of the 14th to the 16th centuries and the mass migration of the Serbs to the Balkans. The late Middle Ages period is also significant for the appearance of a greater number of churches and monasteries built before the Turkish conquest of this area of the Pannonia region and the towns such as Bač, Vršac, Mitrovica, Kovin, Kupinik and Zemun.