Despite the fact that Vojvodina is prevailingly an agricultural area, the idea of establishing an agricultural museum arose relatively lately and it has come about with difficulties, taking up a long time. 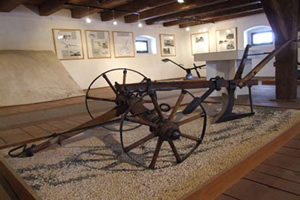 The issue of the Agricultural Museum was put on the agenda again in 1959, following the exhibition called “Agriculture and Farming Cooperation in Vojvodina in the Past and Today”, organized by the Association of Agricultural Cooperatives in AP Vojvodina and the Cooperation Archive in Novi Sad. No results, however, came about. Although the Museum was founded and started operating in 1960, its further development soon turned out to be uncertain. Due to the lack of basic working conditions, the Museum had to close up as soon as in 1962. The museum collection was first handed over to the Cooperation Archive, and in 1966 it became the possession of the newly founded Regional Environmental Institute. 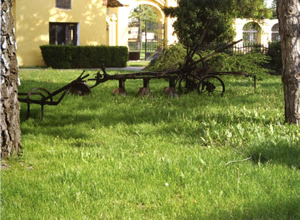 Eventually in 1991, when the collective farm in Kulpin stopped operating, an open competition was announced for leasing the mansion with its extra facilities. The Novi Sad Faculty of Agriculture applied for this competition proposing that the complex should be presented to the would-be Museum of Agriculture. The Executive Council of the AP Vojvodina supported the idea and approved on the initial funding aimed at the renovation of the complex, in order to make it suitable for housing an agricultural museum. Unfortunately, the idea of founding an agricultural museum did not come about at that point either. Instead of an independent museum collection, the Agricultural Museum in Kulpin started operating as a non-governmental organization. The statutory general assembly was held on January 20th 1993, when the Statute of the Museum was approved on. The same year, the entire museum collection, formerly in the possession of the Vojvodina Agricultural Technique Association was relocated to Kulpin from Novi Sad and was given to the Agricultural Museum.

Over the following years, the restoration of the facilities and the gradual completion of the permanent collection was going on, with the support of the Museum of Vojvodina and Novi Sad Faculty of Agriculture. The following exhibitions have been displayed until now: the history of hop gardening, wheat growing, broomcorn, hemp, dairy farming, cattle breeding, hog raising and sheep raising.

Since 2004, the Agricultural Museum has been operating within the Museum of Vojvodina as a department. The latest major reconstruction works on the large mansion were carried out in 2009, the same year when the exhibition of period furniture was displayed.