At the permanent exhibition in the Museum of Vojvodina, an urban street in Vojvodina from the beginning of the 20th century is presented. It is chronologically attached on the economic history typical for these regions. Visitors are guided by carefully chosen, original and authentic objects into an epoch behind us in a different, new way. They can approach the atmosphere of the past through photographs of the most remarkable buildings and authentic shop windows on a photographer’s atelier, a tailor’s workshop, a milliner’s shop, pharmacy, toy shop and china shop. 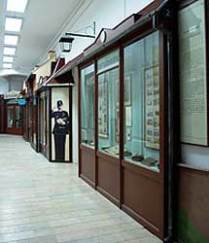 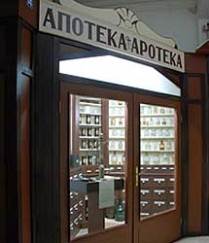 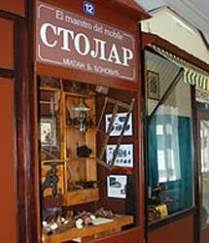 The urban citizens’ way of life has been preserved in traces up until now, and this street is just proving that fact. Do take a walk in this street and, at least for a moment, you will feel the atmosphere and spirit of the city from the beginning of the last century.

By the end of the 19th century, the character of economy was prevailingly agrarian in Vojvodina, based on agriculture, crafts, trade, food and processing industry. These features, inherited from the Austro-Hungarian period, remained throughout the 20th century.

The accelerated development of economy over the 19th and the beginning of the 20th century made it possible both for urban centres and the middle class to develop, which resulted in rich social and cultural life as well as urban shape of the towns in the territory of present day Vojvodina. Towns had already had almost an entirely organized urban structure. Public and administrative buildings as well as private houses were built with outstanding enthusiasm.

Trade played a very important role in the economic development of Vojvodina. Over the first decades of the 20th century, many retail shops were set up, whereas wholesales were still in their rudiments. Most shops were groceries, manufactures’ shops, machine shops, furniture shops, shops with colonial goods, etc.

Crafts were amongst the most developed branches of economy. In urban centres, there were locksmiths’, tinsmiths’, silversmiths’, butchers’, barbers’, tailors’, hatters’ along with some other kinds of craftsmen’s shops. New workshops and trade shops were set up. Their number was constantly growing, even though craftsmanship had to get adjusted to the development level of industry.

Towns had an important role throughout political, economic and cultural history, while their streets and squares were centers where significant events took place. They were also indicators of economic and social life.

Professional photographers have been working in Vojvodina since the mid 19th century. The first photographer’s studio was opened by a painter, Istvan Oldal senior (1853, in Zrenjanin). It was followed by photographers’ studios all over Vojvodina. Joseph Singer, a court photographer, was one of the most eminent photographers in Vojvodina up until 1914. He started his profession in Novi Sad, around 1880. In his house, Singer was running an Art Studio of the First Degree in Dunavska Street at number 9, for taking photographs and for painting. By the end of the 19th century, he advertised his studio in Novi Sad newspapers, mostly in Zastava. In one of his advertisements (from 1891), he announced publicly that a permanent exhibition was on display in his studio, with “various paintings in oil” as well as with photographs.

Beside this widely known studio in Dunavska Street, Singer had another one – at the main square, beside Mayer’s Grand Hotel. He was running his photograph shop for several decades, up until the First World War. His studio under 9, Dunavska Street was taken over by photographer B. Ditmar, who proclaimed himself Singer’s successor.

Porcelain appeared in Europe in the 18th century. By the establishing and strengthening of the middle class, wealthy merchants brought luxurious items from their trips to Pest, Vienna and other European cities, which served either for personal utilization or for households. As a result, more and more interest arose for chinaware in this region. Back in the 18th century, chinaware meant a privilege for the wealthiest. The most commonly used items of porcelain were cups and dishes with gilded or floral motifs. Chinaware of highest quality was manufactured in German workshops and was famous all over the world, one of them being Meissen porcelain. Apart from being of high quality, this porcelain is characterized by special hand made drawings of outstanding esthetic quality.

In the second half of the 19th century, as cultural needs and lifestyle of the middle class advanced, household items from porcelain became widely used. Luxurious artistically designed chinaware, manufactured in Vienna, was sold by merchants at very high prices. Chinaware was used for decoration in homes or, depending on its purpose, was used on special occasions. The second half of the 19th century sees chinaware in everyday life as the so called “ordiner”, which includes dining services, such as plates, cups, etc. At the beginning of the 20th century, workshops in Bohemia took over primacy in the porcelain manufacture by producing chinaware of very high quality.

People were using chinaware as an inevitable cultural frame, as hallmark to the middle class atmosphere, within which life felt more comfortable.

Throughout the 18th and at the beginning of the 19th century, children’s toys manufacturing developed extensively. Children’s toys manufacturing centers were in Germany and Austria. Back in those times, toys were made from expensive materials such as silver, porcelain and metal, therefore, only wealthy families could afford them. Toys from cheaper materials, such as wood were manufactured in both private and craftsmen’s workshops.

In the beginning, toys were marketed in bookstores, ironmongery shops, bazaars as well as in some other kinds of shops, even via post.

The golden age for toys manufacture started in the second half of the 19th century. Toys manufacturers and specialized toy shops appeared. One of the best known toys manufacturer was Kalman Homa (1852-1948), a turner and founder of a turner’s shop called Homa, in Veliki Bečkerek. He was manufacturing and selling toys in his house up until the First World War. Somewhat later, he founded a toy shop under the name Homa-Wambach.

Hats used to be status symbol among the middle class, being an inevitable part of both male and female urban outfit, throughout all the historic styles.

Shapes, decorative elements and various materials for hats were changing over the fashion epochs. The most usual basic models were: hats with brims and those without one. Hats were made of felt, braided straw or died and lacquered bast. Female hats were made by “mašamode” (from the French marchamde de modes). This manufacture was present as early as in the mid 19th century in most towns in Vojvodina, to develop even further in the following decades. Many milliners’ advertisements, published in newspapers, prove this. Milliners manufactured not only hats, but some other fashion details as well, such as: gloves, collars, ribbons, artificial flowers and all kinds of decorations for dresses.

Dressmaking has been among the crafts with the longest tradition in these regions. In smaller settlements, cloths were made mainly by women in their homes. In towns, however, this craft was run by craftsmen: tailors organized within guilds. More than one type of tailors ran this business: seamstresses, Hungarian tailors (szabó) and Serbian tailors (abadžije and kabaničari).

During the 19th century, dressmakers (šnajderi) were making clothes for both men and ladies, according to the latest models launched in Vienna and Budapest fashion magazines. That way, urban clothing approached the fashion style worn in Europe, becoming widely available for everyone, unlike before, when it was the privilege only for the wealthier stratum within the middle class.

A striking development occurred when the sewing machine was invented in the 19th century. The first models were far from being perfect, as long as 1850, when Isak Merit Singer invented his model of the sewing machine, which meant a revolutionary breakthrough when sewing of clothes is concerned.

Milan B. Đonović was born in 1876 in Cetinje, where he learned the carpenter craft. He emigrated to America in 1897, to return to his country on the eve of the First World War, with other volunteers.

After the liberation, he settled down in Vojvodina, where he worked as a carpenter for a while. Between 1930 and 1941 he was running his own furniture manufacturing shop in Novi Sad,.

Thanks to his grandson Milan Đonović, carpentry has been practiced in the Đonović family ever since.

Pharmacies in Vojvodina developed rather late. The first pharmacy in the today’s Vojvodina was founded in 1740, in Petrovaradin Šanac. Following the first one, pharmacies were set up in other places as well: Subotica, Veliki Bečkerek, Pančevo, Vršac, Sombor, etc. The number of pharmacies increased over the 19thcentury and at the turn of the centuries. Pharmacies were opened in small places, while in towns there were usually two of them. Location and area coverage were taken into consideration whenever a pharmacy was set up, as well as realistic economic potentials for its future operation.

The increasing number of pharmacists with a degree enhanced the development of the pharmacy network. The first pharmacists were foreigners. Their professional work was supervised by the city authorities, along with the authorities at the county and state levels. The law and regulations regarding the quality of medicines, professional work and taxes were truly strict. The pharmacies had to be situated in appropriate premises, where medicines could be kept, made and sold.

In the beginning, by the end of the 19th century, motifs on picture postcards were taken from the immediate environment. Most often, town panoramas could be seen on picture postcards or old cores of towns, recognizable parts of downtowns or of a particular street, significant buildings, river banks or resorts.

Picture postcards represent very important documents of an epoch. Their documentary value lays in both the motifs they depict and contents. Many photographs of towns in Vojvodina have been kept thanks to them. They give a lot of information about the urban development of towns, about changes in their architecture, about particular buildings or even quarters which disappeared in the meantime.