The Museum in Kulpin comprises the nucleus settlement from the second half of the eighteenth and the first half of the nineteenth century. This compound of buildings consists of two mansions with extra facilities, built by the members of the noble Stratimirović family, encapsulating the gardens, the old school building, the Serbian Orthodox Church and the Parochial House. Although historically not belonging to the same epoch, the Slovak Evangelical Church, built between 1875-1879 as well as the house where Patriarch Djordje Branković was born, subsequently reconstructed in 1899 to become a Serbian religious school, are also part of this complex. 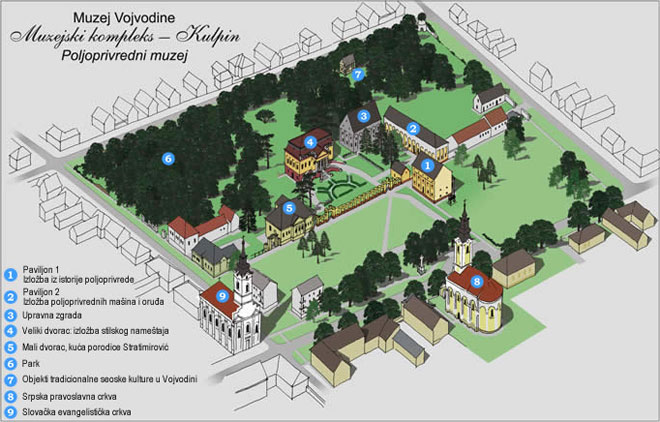 The settlement, once situated on the grounds of the today’s Kulpin and its vicinity, occurred in historical sources as early as in the 13th century. Hungarian King Bela (1235-1270) donated it as a present to the Posh family. The Hungarian sources mention it in the 14th and 15th centuries, under the names Kurpee and Kwolpi. In the Serbian sources, the toponym Kulpin first occurred as one of the venues ruled by Djuradj Branković, in the first half of the 15th century. Some data also prove that Kulpin was a settlement during the Ottoman rule. 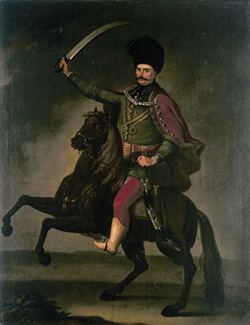 The settlement was left barren after the Peace Treaty of Karlowitz (1699), when these territories got liberated from the Turks. In 1745 Empress Maria Theresa donated it to the Vučković-Stratimirović Serbian family, originated from Herzegovina, for their military merits gained in the war against the Ottomans. During the Austro-Turkish War, in 1737, the Stratimirović brothers - Bogić, Tomo, Ivan and Nikola – initiated an uprising in Herzegovina. The then Serbian Patriarch, Arsenije Šakabenta IV Jovanović, called the Serbian rebels from the Serbian mountain tribes with the Arbanasi-Klimentes to provide military support to Austria. They clashed with the Turkish army near Novi Pazar, Sjenica and Nova Varoš. The superior Turkish troops forced the Austrian army and the rebels to retreat. Fearing Turkish reprisals, Patriarch, along with his escort and people, set off to the north. Rebels from Herzegovina also took part in this so-called Second Migration. In the autumn of that same year, the two Stratimirović brothers: Bogić and Ivan set off to Vienna with Prince Alex Miličević. Their intention was to convey a message to the king from the people of Herzegovina, saying that they were willing to help Austria with 30,000 lads in the war against the Ottomans. With the help of Count Herberstein, military commander in Krajina and Croatian Ban Joseph Esterhazy, they were received by Emperor Karl VI. As the proof of this proposal, they subsequently obtained and handed over a "Statement" approved by Herzegovinian Parliament and representatives, signed by 42 prominent Herzegovinian leaders. Among other requests, there was one asking Austria to send military troops to Herzegovina. The War Council accepted this offer. At that point, however, it was not possible to send troops. Turkish troops were entrenched along the Sava and the Una rivers, therefore, Bogić and Ivan, with other Herzegovinian refugees, joined the Austrians in waging war against the Ottomans in the area of the Military Border. The war ended with the Belgrade Peace Treaty in 1739, which definitely confirmed the Sava and the Danube rivers as the border between Austria and Turkey. Since Bosnia and Herzegovina stayed within Turkey, the Bučković-Stratimirović brothers approached Empress Maria Theresa with a plead to let several hundreds of families from Herzegovina settle down permanently in Austrian territory. The Empress accepted their plead and granted a noble title to the family. By a Charter, issued July 17th 1745, she donated Kulpin to them with 10,000 „jutro“ (1 jutro - about 3acres) of land. The Stratimirović family kept 3,200 jutro of land. Each brother got 800 jutro, and the rest of the land was, excepting the meadows, divided into 80 "sessions" and further divided up into halves or quarters and awarded to recently settled down families, except that each of the two brothers was eligible to harvest tithes from his 20 sessions. It is believed that at that time about 200 families moved from Herzegovina and settled down in Kulpin.

The Stratimirovićs built their houses on the edges of a large meadow- called the Valley. At first, the houses were small and temporary, but later on, big mansions were erected. One of them was located where Slovak Evangelical Church building stands now. The so called small mansion (from the second half of the 18th century) and the big mansion (kaštel), built in 1826, have been saved from those times. On the opposite side of the valley, across the street, the Orthodox Church, the Parochial House, the Serbian School and the Municipal Hall were built. 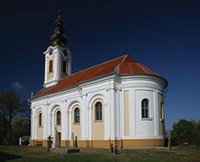 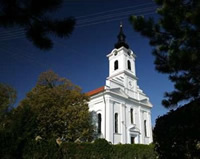 The Orthodox Church was erected between 1809-1813on the grounds of the former small stave church. The church was dedicated to the Ascension of Jesus Christ (the feast known among the people as Ascension Day), decorated by a beautiful iconostasis, the work of a renowned artist Jovan Kljajić (1846-1862). The churchyard is now the burial site of several members of the Stratimirović family.

While raising the settlement, the Stratimirović family got indebted soon following their settling down. In 1756, by an agreement, they relinquished the right of collecting revenues from the lease for the period of 10 years, transferring this right to Baron Frano Brnjaković. This was the year that appeared in documents as the beginning of settling in of Slovaks in Kulpin. Today, Slovaks make the majority population in this settlement. 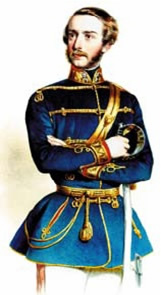 The Stratimirović family yielded to posterity several prominent and educated individuals. Among them, the most outstanding ones were Stefan and Djordje Stratimirović. Stefan Stratimirović, Karlovac Metropolitan (1790-1836), was the spiritual and ideological leader of the Serbian people in the Hapsburg Monarchy for a couple of decades. With skilful and perceptive policy, he supported the Serb liberation struggle during the First and Second Serbian Uprising against the Ottomans. He gained merits for establishing the first Serbian high school (1791) and the first Theological Seminary (1794) in Sremski Karlovci (Karlowitz), the high school in Novi Sad (1810), the Teachers’ College in Sentandreja (Szentendre ) (1811), along with icon painting colleges and several other educational and cultural institutions.

Djordje Stratimirović (1822-1908) was the commander of the Serbian army in the revolution of 1848/49. The Serbian people’s struggle aimed at gaining national rights within Austria resulted in Serbian - Vojvodina. Djordje actively served in the Austrian military from 1849 and attained the rank of Major General. On behalf of Austria, he served diplomatic missions in Montenegro, in Corfu, in Epirus, Serbia and Italy.

The manor and major part of the estate were bought from the Stratimirovićs by Matej Semzo od Kamjanike. This Hungarian family was managing Kulpin estate only for a short time. They sold the estate to Lazar Dundjerski in 1889. 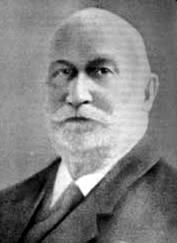 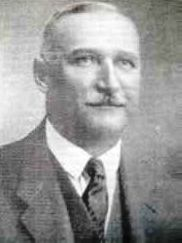 The Dundjerski family had been managing the estate up until the end of WWII, more precisely, until 1945. Lazar, with his son Djordje, contributed a lot to the development of agriculture. Beside Kulpin, this family also owned large estates in Čeb (now Čelarevo), Kamendin, Bečej, Crna Bara and Hajdučica. The family also owned mansions in Budapest and Novi Sad. In their homes, including Kulpin mansion, they often hosted renowned public figures coming from the cultural and political sphere. The large mansion was refurbished in 1912, after Momčilo Tapavica’s design, who was an architect from Novi Sad. The estate was confiscated from the famlily, under the provisions of the Agrarian Reform and Colonisation Act. The Communist Government in the Democratic Federative Yugoslavia limited the allowed landholding maximum to 30 jutro (1 jutro-3 acres). Territories of land beyond this limit were confiscated and nationalized. By collecting properties from landlords, banks, churches and other real estate owners, a vast area of land became state owned and as such, it was divided up among those, who had not possessed any land, or it was donated to new settlers, who were either planted in from backward areas of the then Yugoslavia, or arrived from territories devastated by war activities. This action resulted in significant transformations regarding agrarian and ownership relations in Vojvodina.

The complex with its both mansions, the park and the ornamented fence have been declared protected venues within the state’s cultural heritage patronage. The complex has been recognized as an outstanding cultural monument by the Vojvodina Autonomous Province Assembly.