The big mansion or the kaštel is the central building within the complex. It was erected in the early 19th century. According to some data, the construction works were completed in 1826. By that time, the Stratimirović family had become larger and had obtained great reputation among the Serbs in the Hapsburg Monarchy. Both mansions were erected by the second and third generation of this family, already born in Kulpin. They added the Kulpinski surname to their family surname Stratimirović, while they completely abandoned the Herzegovinian Vučković surname. The new generations of the Stratimirović family yielded a few prominent individuals, engaged in different professions. The most prominent among them at that time, certainly was Stefan Stratimirović, who was head of the Metropolitan of Karlovci, between 1790 and 1836.

No data are available as who the designer and constructor of the mansion might have been. An old photo - postcard preserved the original appearance of the mansion. The building was thoroughly reconstructed in 1912, when the property was in the possession of the Dundjerski family. The reconstruction works were carried out by Momčilo Tapavica, a famous architect from Novi Sad. The biggest change was carried out on the roof. The hexagonal tower, which was once erected on the roof and dominated the building was removed from the central part. Originally, it was a watch tower with a big clock and appropriate mechanism, the application of the Stratimirović family’s coat of arms and many other decorative details. The quadrilateral roof was transformed into a roof with two slopes, while a decorative frieze was put on the frontal part with ornamented rectangular boxes and vases on the corners.

This reconstruction did not substantially changed the original architectural features of the building. The mansion has retained all the hallmarks of the Classicistic style in which it was originally built. 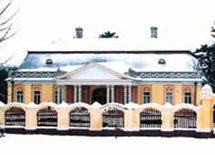 In this region, constructors of mansions and landowners’ villas from the end of the 18th and early 19th century, generally followed the usual rules of the Classicistic style. This style is characterized by "simplicity, clear parsing, the impression of monumentality and a touch of charm“. In the frontal part of the building, by rule, an entrance porch would be designed, the so called portico. In Kulpin, the portico is right in the middle of the mansion, thus the facade is divided into two identical sides. It was built in the typical Classicistic style. It consists of a staircase, access ramp and four pairs of ionic pillars, carrying the architrave and pediment.

On the back, there is a pent angular entrance porch with circular openings on the sides. Above the porch, there is a spacious terrace, surmounted by a dome. It is accessible from the drawing room on the first storey. The terrace provides a unique and striking view on the park and its surroundings.

The interior of the mansion is also built in the Classicistic style. The drawing room, connected with two rooms, one on the left and one on the right side, is accessible directly from the spacious foyer. A long hallway provides accessibility to other rooms in the mansion.

The construction material matches the style of that particular age. The walls are of brick. Stone was used for the portico columns, as well as for the stairs and floors in the interior of the mansion. The outer and inner walls are covered with lime mortar, and the roof was originally covered with special round shaped tiles. On the roof, there were symmetrically arranged openings: three from each side of the portico, and two chimneys. Later reconstructions introduced some changes on the roof: in addition to the two slopes, the roof got a new cover with eternit plates.

The last comprehensive repair works on the roof, the facade and interior, took place in 2009. It was then, when the collection of period furniture was displayed in the mansion. 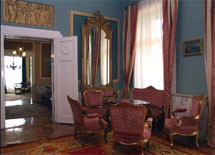 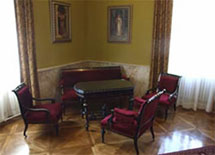 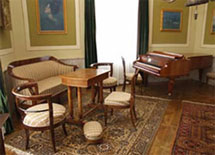 The collection of period furniture in the Museum of Vojvodina has been systematically accumulated, ever since 1955. As soon as in 1961, the first furniture exhibition was displayed at the Museum. In 1967, the Museum earned the right to dispose and use the manor at Čelarevo with its complete furniture, so the collection became remarkably enriched, thus an appropriate space could be obtained for the exhibition. In late 2009, this collection was transferred to the mansion in Kulpin, and displayed there. This exhibition contains items covering the period from the early 18th to the first half of the 20th century.

> The exhibition of period furniture