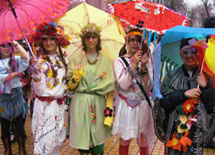 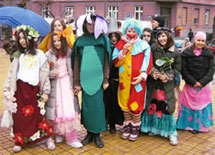 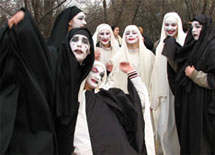 Alongside February, March is also a typical month for carnivals (Lat. Carne-vale – farewell, meat). It is at least if we are concerned, because we organize national holidays in compliance with our tradition, which has to do with carnivals called White Carnivals, since they are held over the White Week. The Museum of Vojvodina has been following up this traditional event for over ten years now. It has grown into a true carnival being not just an imitation of processions, once so familiar in settlements all over Vojvodina and Serbia.

White Week was the last week preceding Great or Easter Fast. Carnival processions often featured figures in the roles of bride and bridegroom, old woman, priest, there were also comedians-funny men, wearing masks and šiljkans, recognized by their fur coats turned inside out. In the procession, usually a male would be disguised as a pregnant woman and a woman would be dressed up as a bridegroom. Participants at carnivals often painted their faces in black with coal, wore a rattler on their belt, carried rods, brooms, rattlers in order to drive away witches and demons. They would sometimes carry a prop in the shape of a phallus, which symbolized fertility. Zoomorphic, theomorphic and anthropomorphic masks were often worn by the participants, who disguised themselves as cooks, chimney sweepers, physicians or scribes...

White Week was somewhere called riddle week, because people asked each other questions in riddles and puzzling and gave surprising answers. The peak of the White Week was the last day, celebrated with lots of fun, by playing tricks, joking and singing. Processions could include real theatre groups, where actors were entertaining the public, while in return, people around would give presents to award them.

This custom is still being practiced in the countryside, especially on the turn of the seasons. Only as an attraction, though, not joined by as many people as before and without any black art related to fertility.

In many European countries and cities, the turn of the seasons is characterized by folk feasts with masked processions, street performances, banquets and above all, laughter! Laughter bears healing power, it rejuvenates, strengthens, helps prepare people to face spring and future bringing them new challenges and, hopefully, more happiness.

A huge treasury of thoughts exists on carnival related laughter, describing it as: festive laughter, widely spread, universal, aimed at everything and everyone. The whole world is observed as funny. Carnival laughter is joyful, exalting, mocking, it ridicules. It denies, confirms and regenerates at the same time. It has maintained the ritual of ridiculing gods from the ancient rites; the cultic and limited dimension has been lost, leaving the human, universal and Utopian meaning to prevail.

Carnivals have always been spoken and written about a lot. They have been objects for research and artistic inspiration. Many themes from carnivals have been reflected in paintings, music, literature and film, one of them being the mask itself.

Until they became objects of entertainment, masks had a long way to pass. The wish to disguise and change one’s identity over certain period of time and in certain situations, has remained one of the characteristics of ritual practices in almost all ethnic communities up to these days. The primary meaning lies in the silent struggle between dying and rebirth, the tendency of multiplying life itself.

At carnivals, masks behave according to what they hide or reveal, caricature, exaggerate or mock. Events at Liberty Square, on the plateau in front of the new building which houses the Museum of Vojvodina as well as in our town’s streets, are documented by many photographs. They keep the tradition initiated by the Museum of Vojvodina wishing to cherish folklore and save it from oblivion. Our Museum invites folk groups, elementary and high school students, students from Novi Sad University, various societies and interested citizens. Each year, the most beautiful masks are awarded in the following categories: the most authentic mask, the best children’s mask, the most successful mask for adults and a special award for the best presented mask. 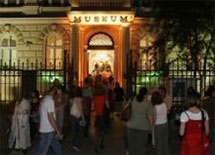 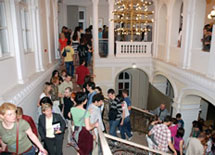 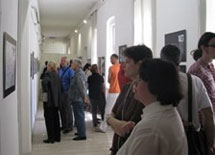 Back in 2004, a group of enthusiasts from Belgrade introduced in Serbia a project known worldwide as the Museums Night. Although the first cultural event of this kind was held only in Belgrade, the public and the media showed great interest, therefore, The Museums Night has grown into the best visited cultural event in Serbia ever since, and year by year, it is spreading on more and more locations and cities.

Since 2007, the Museum of Vojvodina has been participating in the Museums Night, and has become a venue visited by many Novi Sad citizens thanks to its attractive programs. Every year, curators at the Museum try their best to reveal a segment of potential exhibits kept in depots, and present it at exhibitions and cultural events.

At the first Museums Night, back in 2007, the public enjoyed watching the exhibition Meeting Citizens of Vojvodina, which was rated as the most successful exhibition that year, having been awarded by the Serbian Museum Society with “Mihajlo Valtrović“ award. Apart from the exhibition, which brought closer the athmosphere of the past from the end of 19th and the beginning of the 20th century, inter-active programs, an open class of dancing and a presentation of old crafts also captured the public’s interest.

In 2008, at the second national Museums Night, visitors could watch how a pre-historic dinner was prepared in a pre-historic house and they could also taste special food. A folk event called Revena entertained the public late into the night.

During the third Museums Night, enormous interest was shown for the exhibition „A Late Antique Helmet from Jarak“, when a reconstructed helmet from Jarak and two gilded helmets from Berkasovo near Šid were presented to the public. Girls and young lads dressed as Roman citizens and a presentation of Roman military doctrine in a performance in Dunavski Park was a special attraction for visitors. That same year, another exhibition drew public attention, which was “Homeland by the Danube – the Serbs and the Germans in Vojvodina –living side by side”.

The fourth Museums Night will be remembered by the exhibition “An Archaeologist as a Detective” which revealed an unusual process of a scientific invention. Trying to unfold a several millennia old secret, archaeologists asked help from forensics, who came up with fantastic analyses. The Museum also presented to the public the most valuable paintings created by painters in Vojvodina in the 20th century, kept in Vojvodina Museum’s Collection.

That same year, two new sections within the permanent exhibition were opened up. “An Urban Street in the Past” depicted the image of a street from the beginning of the 20th century, where carefully chosen, original and authentic objects were displayed in the shop windows of a photograph’s atelier, a tailor’s workshop, a milliner’s shop, a pharmacy, a toy shop and a china shop.

The permanent exhibition with the title “Vojvodina Between the Two WWs” presents life from that time from cultural, social and political aspect, while the exhibition “Anti-fascist War in Vojvodina Between 1941-1945” shows in a contemporary way the beginnings, development and victory of the anti-fascist movement and Liberation Army over forces of fascism and Nazism in Vojvodina.

The Museums Night is a cultural event which can afford the visitor many delights and surprises. Beside regular visitors, new visitors are attracted to the inter-active cultural programs being an innovative way of communication in museums and galleries.